Putney Swope is a film directed by Robert Downey Sr., and made on a minuscule budget, that became a cult sensation. It was probably his most famous film as a director (these days he’s better known as the father of actor Robert Downey Jr.). He’s retired as a director these days—probably doesn’t need the money as I assume his son has probably sorted the mortgage and bills.

It’s about the only Black man on the Board of an American advertising company. The chairman dies very suddenly, and to everyone’s shock, the vote for the new chair goes to Putney Swope (Arnold Johnson) as his successor. Very quickly, he completely dismantles the firm and turns it into “Truth & Soul Inc.” He gets rid of all but one of the white employees, refuses accounts from companies making alcohol, tobacco or toy guns, and instead makes the most subversive, outlandish ad campaigns—which are of course incredibly successful. Antonio Fargas also appears as “The Arab”.  Quite soon the US President and his wife, both of whom are little people, decide that the firm’s success is a threat against national security.

It’s one of the greatest “fuck you” movies ever made: a rip-roaring satire of race politics, pulp culture and the advertising world. Downey Sr. actually does the voice for Swope, in a move reminiscent of Sorry To Bother You. Boots Riley claims he had not seen Putney Swope despite this and some other similarities—it seems to be true, as the film was mentioned to him when he was being mentored through the Sundance Institute film programme and he likely decided that he’s best not see it until he had finished his own. There’s certainly more of an influence of Brazil on Riley’s film anyway. 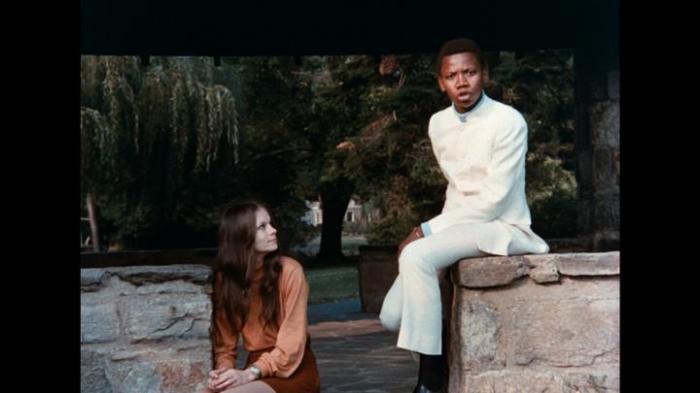 According to Downey, the overdubbing was because Johnson kept flubbing his lines. The overdubbed “white voice” adds an extra surreal element to the satire. Similar to the film If… the majority is in black and white, but all the adverts from Truth and Soul Inc. are shot in colour. It’s a smart satire, but just as willing to go for the lowest-common-denominator joke when it works, and pulls it off magnificently.

Putney Swope has been kind of hard to track down for the last 17 years, especially outside the US, going in and out of print several times despite doing fairly well on its release. The last before this Vinegar Syndrome release, it was part of a Criterion Eclipse box set with other Robert Downey Sr. films from the ‘60s. This version was restored in 4K from various 35mm pre-print elements. There are a lot of special features included, from the old commentary with Robert Downey Sr., several archival interviews with the director, a Q&A from a screening at the Philadelphia Film Festival, an audio interview with cinematographer Gerald Cotts, a new audio commentary from film critic/historian and programmer Sergio Mims, and the original theatrical trailer.