David Lynch undeniably is the modern-day face of surrealism on the big screen, only maybe Luis Buñuel (who of course was an original surrealist) is more synonymous with surrealism. Lynch however claims Buñuel had little influence on his work because he didn’t see his work till much later. This set shows contains two stark extremes of his filmography, his masterpiece which is Blue Velvet but also the his worse film Dune. Lynch dislikes talking about it and has practically disowned the film and the longer TV cut (which isn’t included here) carries the dreaded “A Film By Alan Smithee”.

All of Lynch’s best films with the exception of The Elephant Man are original screenplays by Lynch by himself or with a co-writer. Dune is based on the widely successful sci-fi epic by Frank Herbert and Lynch himself admits he wasn’t really a science fiction fan when the maverick producer Dino De Laurentiis offered him the chance to adapt it. It wasn’t the first attempt a visionary director tried to make it; both Alejandro Jodorowsky and Ridley Scott tried and failed. The Jodorowsky attempt even got its own documentary.

Dune given its history was always going to be a difficult production and Lynch to some extent is completely out of his depth. Lynch had access to way too much money, the film ended up costing at least in the region of $40,000,000. The film’s budget if you adjust with inflation which is almost the cost of every feature Lynch has done since, he vowed to never make another “big” film after Dune. However they started running out of money near the end of production so a lot of what Lynch had envisioned had to be scrapped and the effects ended up suffering in the end.

For a director whose own name has entered the vernacular as a description of strangeness. It’s funny to find out his biggest film is actually his most incomprehensible even his more deliberately experimental films like Eraserhead or his last feature Inland Empire are more narratively coherent. The dialogue is almost exclusively exposition which to somebody who hasn’t read the novel makes little to no sense. Lynch visual genius however is on full flow here with beautiful intricate set and costume design which are a wonder to behold. 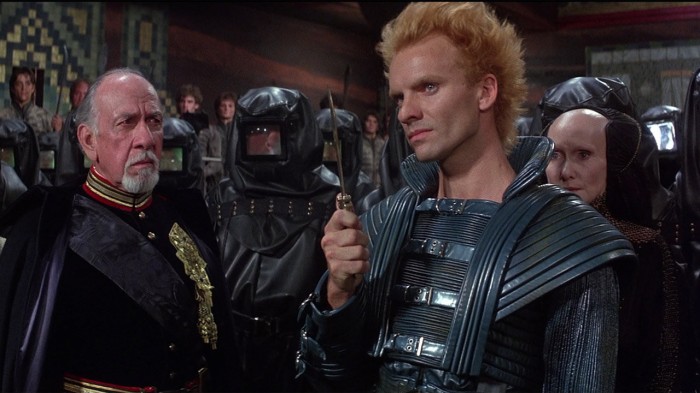 Dune does boosts an extraordinary cast which a large chunk Lynch recast for his next film Blue Velvet luckily Sting was not one of those who were carried over. Lynch discovered MacLachlan for Dune and gave this unknown actor the lead in this huge film and tries his best but if somewhat out of his comfort zone.

Blue Velvet is a totally different beast, MacLachlan is very much at home as the young man Jeffrey Beaumont who starts unravelling the seedy underbelly of his small Pacific Northwestern town of Lumberton. Val Kilmer was offered the role but turned it down saying the script was pornographic but says in hindsight he would do the version that made it on-screen. Lynch even toyed with casting Chris Isaak in the role but he turned him down but let him use some of the music from his fantastic debut album in the film.

Jeffrey finds a severed ear and delivers it to the police father of Sandy (Laura Dern) who lets slip some information of the case. Jeffrey finds out about the woman Dorothy Vallens (Isabella Rossellini) who may be involved with the case and decides to sneak into her apartment after stealing a key posing as a exterminator. Dorothy confronts Jeffrey after she finds out about his presence but it’s soon interrupted by the arrival of Frank Booth (Dennis Hopper) who is a bisexual psychopath. The film takes a turn where it becomes increasingly surreal with a small s and violent which includes an iconic performance of Frank lip-synching to Roy Orbison’s In Dreams.

Blue Velvet more than any other of Lynch’s film’s is the culmination of the themes and obsessions of Lynch throughout the years. Lynch was raised in some small towns similar to the one depicted in the film in Idaho and Washington so he understands the dynamic of small town life well. Jeffrey also proclaims at times he is “seeing something that was always hidden”.  The film also displays Lynch’s fascination with blending the psychosexual with American boy scout values (Lynch himself was a boyscout) and also a love of film noir. The film’s ambiguity of two opposites really can summed up with the line “I don’t know if you’re a detective or a pervert.” which Sandy says to Jeffrey before he enters Dorothy’s apartment for the first time. Lynch would return to a similar world when he would make his television show Twin Peaks as his next project which also starred MacLachlan as a detective in a small town.

Kyle MacLachlan was still a relatively unknown actor he only had done Dune before Blue Velvet and some local Seattle theatre. His performance is certainly based somewhat on Lynch without the distinctive voice Lynch has or hand movements.  Jeffrey also somewhat dresses similar to Lynch with the exception he doesn’t button his top button on his shirt. The scene where Dorothy runs through the streets naked also has a basis on the real life experience of Lynch who once saw a woman when he was very young who was running through the streets naked and he wept uncontrollably.

Dennis Hopper at the time was basically blacklisted to a good 10 years plus of severe drug and alcohol addiction. Blue Velvet was released in 1986 which was the year he was propelled back into the A list of supporting actors with other roles in Hoosiers, River’s Edge and the underrated The Texas Chainsaw Massacre 2. Despite a strong year and an oscar nomination for Hoosiers it wasBlue Velvet that he is remembered for and it’s really a tour de force if you’ve ever seen one. He was however Lynch’s 3rd choice after Harry Dean Stanton turned the film down due to its violent nature but Stanton has since worked with Lynch a couple of times. Hopper infamously sent a tape saying “I am Frank Booth!” and it got him the role.

The supporting cast is an extraordinary wealth of character actors most of whom Lynch worked with previously. The majority of the known supporting actors worked with Lynch on Dune such as Brad Dourif, Dean Stockwell and Jack Nance (who was also Henry in Eraserhead) who make up some of the members of Frank’s gang. Isabelle Rossellini gives a career defining role and was still relatively unknown except for her famous parents and unlike Ebert’s annoyingly naive review I don’t think she suffered for one second. Laura Dern as Sandy perfects the girl next door innocence Lynch was looking for and Molly Ringwald turned the role down.

Blue Velvet may lack the overt surrealism of some of Lynch’s other films but it still has that dreamlike feel that only Lynch can produce. It remains the best entry point for the uninitiated because its has a straight forward narrative but also touches of surrealism which will make the more extreme films of Lynch’s career easier to navigate for a first time viewer. So in turn its Lynch perfect culmination of everything he is about cinematically and for me remains his masterpiece despite making some truly masterful films later on his career such as Mulholland Drive and The Straight Story. It’s also the first time Angelo Badalamenti composed a score for Lynch and it’s tied with Twin Peaks as his best work for Lynch.

The discs are both relatively packed for what is extensively a budget reissue so you get your money’s worth. Dune includes a great documentary which is very blunt about the film’s failings and some of the film’s virtues and some shorter featurettes are also included on the disc. Blue Velvet has the fantastic feature-length documentary “Mysteries of Love” (named after the shoegazy song featured at the end of the film) which goes into much depth into the production and it’s release. Hopper gives a fantastic 45 minute interview about his career but he mostly talks about Blue Velvetand Lynch. The mixed review from Ebert and Roeper is included and some fun behind the scenes clips and outtakes round the disc up. The 45 minutes of deleted scenes aren’t included but are available on a 2-disc version of High Fliers.