World on a Wire came midway into Rainer Werner Fassbinder’s insanely productive but short career, and marks a real turning point in his work. His early films wear their influences on their sleeve and are incredibly hit and miss, but when he made World on a Wire, he was starting to experiment more and more with stylized imagery. The visual splendour of Douglas Sirk’s melodramas is slipping in, along with ideas from Nicolas Ray, things he wanted to do in those early films but hadn’t quite figured it out how to pull it off yet.

It’s a very unique film in Fassbinder’s career, because it’s one of his three big television projects, and also a one-off excursion into science fiction—not a genre you immediately connect to Fassbinder. It’s based on l Simulacron-3 by Daniel F. Galouye, an incredibly obscure American science fiction writer. Decades later the same book would be adapted again as The Thirteenth Floor (1999), which was a far more mainstream Hollywood movie, but also an interesting film in of itself. The source book was an early example of simulated reality in science fiction. Philip K. Dick, of course, got there before, but idea of a computer-based reality was still ahead of its time in 1964 when the book was published.

The narrative unfolds in two parts, ranging across a sprawling three hours and 32 minutes. The story is seen through the eyes of Dr. Fred Stiller (Klaus Löwitsch) who takes over the Simulacron project after its previous project leader suddenly dies. Is the computer somehow behind this sudden death? Who is real? People start to disappear, and Stiller seems to be losing his grip on reality.

It’s an astonishing piece of work, and just like Alphaville (Eddie Constantine has a small cameo in this as well) is really mid-‘60s Paris, besides some minimal design it looks like the director’s own world, early ’70s West Germany. It’s set somewhere in the near future—maybe 20 minutes into the future, like Max Headroom? It’s one of Fassbinder’s more accessible films, despite the length, partly because it’s a very pulpy noir tinged sci-fi story that’s like a super-low-tech brutalist The Matrix. Funnily enough, when the American remake The Thirteenth Floor came out, it went head-to-head with The Matrix and was a quickly forgotten in the shadow of its much more successful competition and the similarly themed Dark City from the year previously. 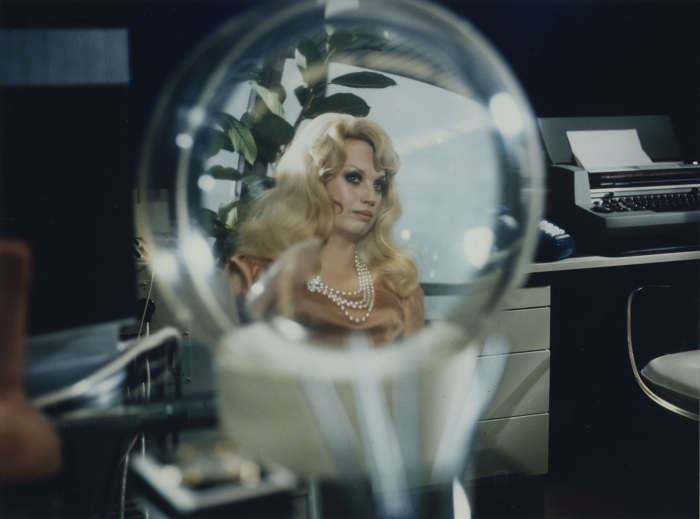 Fassbinder decides to focus on the philosophical and ethical questions behind simulated reality instead of doing what most filmmakers would do with such material, namely make it into a smart sci-fi action film. This makes it a unique piece of filmic science fiction, which is probably closer to Andrei Tarkovsky’s Solaris then another contemporary sci-fi film, like Soylent Green. Fassbinder also employs visual metaphors to depict the breakdown of reality: mirrors are used prominently, which of course goes back to Lewis Carroll’s Through the Looking-Glass, and What Alice Found There. It might be a little hackneyed, but Fassbinder is a master of using mirrors—he also uses mirrors expertly in In a Year of 13 Moons to illustrate the mental torment that the transgender protagonist is going through in that film.

It’s hard to pick a good starting point with Fassbinder as a director, because of the diversity and breadth of his work. But if you like interesting science fiction that’s noir-tinged. this isn’t a bad place to begin. Second Sight previously released World on a Wire on DVD, and for a long time that was the only release in the English-speaking world. They’ve finally done a big upgrade. It include a bunch of bonus features, including a documentary, archival footage, and interviews with the assistant director and professor Nick Borstrom. The booklet includes new pieces by Anton Bitel and Daniel Bird, archival writing, stills and on-set photos as well.