It’s that time of year again: the Leeds International Film Festival is back with a full slate of films. Here are my top picks, which focuses especially on the “Time Frames” strand, plus some choice cuts from the cult film strand “Fanomenon” list and main selection.

On opening night you have a choice between Mike Leigh’s Peterloo, which the director himself will be introducing in two back-to-back screenings at the Vue in The Light (15:00 and 17:00, with a Leigh Q&A), and radical rapper Boots Riley’s Sorry To Bother You, the absurdist sci-fi satire about capitalism and racism, at the Town Hall (21:00). Peterloo covers the drama behind the Peterloo Massacre in Manchester, where people marching for social reform were brutally murdered. Sorry To Bother You is a hilarious missing link between Putney Swope and Brazil.

Ben Wheatley’s Happy New Year, Colin Burstead is my top pick on the 2nd. Wheatley’s latest was shot under the radar, and is about a New Year’s party that falls apart. Wheatley will be in attendance at its 20:30 Hyde Park showing. Happy New Year… will also run at 14:00 at the Vue at The Light on the 6th, and on the 7th at 6pm.

At City Varieties, you can catch Can You Ever Forgive Me? (15:00 and 20:15), a Melissa McCarthy film that is getting good reviews. It’s a black-comedy biopic about infamous celeb biographer Lee Israel, who takes to forging fake letters from deceased authors and playwrights to revitalise her career, with McCarthy in the lead and Richard E. Grant as her friend Jack.

Can You Ever Forgive Me? jostles with the Suspiria remake at 19:30 (Leeds Town Hall), Luca Guadagnino’s follow-up to Call Me By Your Name. It stars Dakota Johnson and Tilda Swinton, amongst others, and is billed as a radical revamp of Dario Argento’s original. Suspiria has divided critics and audiences since its premiere in Venice. I’m cautiously optimistic, but a bit wary due to its two and half hour running time. It will definitely be interesting to see what Guadagnino has done with it. For those who miss it the first time around, Suspiria will return to Hyde Park on the 6th at 20:00.

To end the night, there’s one of my favourite films, Steve De Jarnatt’s Miracle Mile, which I will be introducing at Hyde Park Picture House. One of the best films of the 1980s, the basics are: boy meets girl, boy gets insane phone call, boy must find girl right away to avoid a catastrophic outcome (any more info would be a spoiler). It’s a set-up that would make Hitchcock blush, and is part of the festival’s “Time Frames” selection—all films where the action takes place within 24 hours. 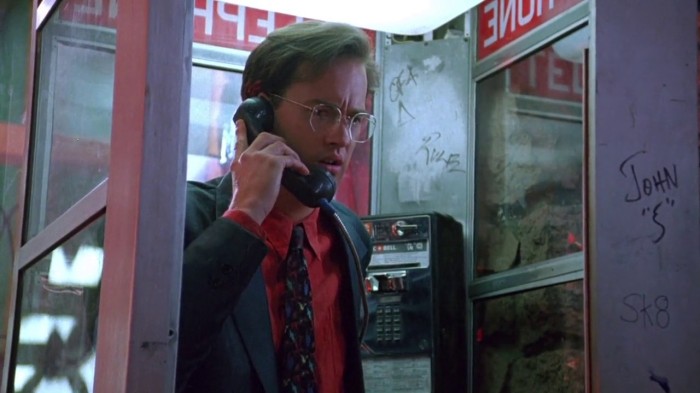 Clerks will be on the big screen at the Vue at 16:30. It was Kevin Smith’s $27,575 debut, and possibly still his best film. Dante and his best friend Randall hang out and talk shit. It’s always funny.

At 13:00 the Town Hall will screen one of Hitchcock’s early films for free, Blackmail, with a live score. Blackmail was released in both silent and sound versions; this will be the former. It’s one of the first of the director’s films where Hitchcock’s style and usual concerns began to come to the fore. It also plays at Chapel FM on the 10th.

The Image Book will run at Hyde Park at 6pm. It’s the latest film by John-Luc Godard, and will probably the usual pretentious mix of cinema and ‘revolutionary’ ideas. It’s probably awful, but it’s 84 minutes, it’s got some Buster Keaton footage in it, and it’s great that Godard is still making films at the age of 87.

Widows, the latest from Steve McQueen, is a heist movie follows the four surviving wives of a group of failed robbers. The cast is amazing, and includes Viola Davis, Michelle Rodriguez, Colin Farrell, Daniel Kaluuya, Robert Duvall and Liam Neeson, amongst others. It’s showing at 17:30 and 20:15 at the Town Hall.

Peter Stickland’s In Fabric follows up from his awesome Duke of Burgundy, and follows a cursed dress as it moves through the lives of several owners. (Oddly, it has a credit for “mannequin pubic hair.”) On the 7th, it will run at 20:15 at the Vue, with follow-up showings on the 9th at 20:30 at the Vue and again on the 11th at Hyde Park at 20:15.

On Thursday, Leeds Town Hall offers one of the best double bills you could ever see: Dog Day Afternoon (13:00) and Fail-Safe (15:30). Also part of the Time Frames series, Sidney Lumet’s Dog Day Afternoon is simply one of the best films ever made, and Pacino was never better. Lumet’s Fail-Safe is less well known—it’s like Dr Strangelove if it hadn’t been a comedy, with Henry Fonda playing the President who everybody wished was the president.

This day at 14:00 there is a rare 35mm screening of Roman Polanski’s Knife In the Water, which will also be shown at noon on the 8th, both times at Hyde Park Picture House. Polanski’s first film, Knife In the Water  is a slow-burn thriller that’s mostly set on a yacht, as two men fight over a young woman.

In the evening, the very popular ‘Night of the Dead’ all-nighter (20:15pm to 4:00 on the 10th) features several films, including Night Shooters, a British low-budget zombie film set in a disused office block; anthology film Nightmare Cinema, with episodes directed by Mick Garris, Joe Dante and David Slade, among others; the Canadian film Knuckleball about 12-year-old Jacob, who is left alone at an old farmhouse were things begin to go very wrong; and One Cut of the Dead, a Japanese movie about a hack filmmaker trying to make a zombie feature in an abandoned WWII installation (as you might imagine, the zombies turn out to be real). That last one is only 96 minutes long, and starts with a 37-minute single take! For those who can’t stay up quite so late, One Cut of the Dead also runs at Everyman at 20:30 on the 10th.

The first screening of Beautiful Boy, the hotly anticipated new film with Timothée Chalamet is at 18:00 at Hyde Park. Chalamet plays a young meth addict, and the film concerns his relationship with his father, played by Steve Carell. It also can be seen at the Vue at 20:30 on either the 12th or the 14th.

After Hours, Martin Scorsese’s most psychotronic film, runs at 23:00 at Hyde Park. It wasn’t a huge hit, but After Hours kind of saved Scorcese’s career after the perceived failure of The King of Comedy. It’s a crazy, Kafkaesque tale of a yuppie who gets thrown into a weird New York nightlife scene after agreeing to meet a girl in a coffee shop. It’s one of the least frequently screened Scorsese films, with a cast that includes Griffin Dunne and Roseanne Roquette, plus a number of offbeat cameos (including Cheech and Chong).

As part of the “Time Frames” series, William Friedkin’s adaptation of Harold Pinter’s The Birthday Party arrives. It’ll be worth seeing this one in the proper aspect ratio (unlike the British DVD). It’s at Hyde Park at 14:30, and serves up a mix of kitchen-sink drama and gothic horror.

Jim Jarmusch’s Night On Earth, set in taxis around the globe, isn’t one of the director’s greatest achievements—but it’s an anthology movie, so naturally a bit messy. Winona Ryder, Giancarlo Esposito, Roberto Benigni and others are at the wheel, and it’s all tied together with a Tom Waits score. It’s at 17:45 at Hyde Park, and again at 12:30 on the 14th.

The big one this day is The Old Man and The Gun (Town Hall at 19:30, or 20:30 on the 15th). Director David Lowery (director of A Ghost Story, Lowery is also one of the main people behind the brilliant TV series Strange Angel) features Robert Redford in what is rumoured to be his final film role. Redford plays a charming OAP bank robber against a cast to die for: Tom Waits, Sissy Spacek, John David Washington, Danny Glover, Casey Affleck, Elizabeth Moss, Keith Carradine, basically everyone who’s good. I haven’t seen it yet, but it sounds fantastic.

My final pick is a rare 35mm screening of Magnolia. It’s not my favourite Paul Thomas Anderson film by any stretch, but it’s a good movie with great performances and a surreal climax. Tom Cruise plays a proto-Jordan Peterson character. It plays at 15:00 at Hyde Park Picture House.