This set is comprised of four William Castle movies, including The Tingler, which was probably his best. For those who don’t already know his name, Castle was more of a producer (with credits that including Rosemary’s Baby) than a director, and more of a showman than anything else. He directed far more movies that have been forgotten—there are 15 years of Castle films that no one knows much about. It wasn’t until Macabre in 1958 that he struck out on his own to produce B-movies in the thriller/horror genre, such as House on Haunted Hill. They were aimed at a younger audience than the average horror film of the time—they’re more like ghost-train ride than great narratives. Unfortunately, the rights to House on Haunted Hill, his best-known film, are a complete mess. It can be found in various public-domain editions, but it wasn’t until Shout! Factory released it as part of a Vincent Price boxset that it had any kind of restoration work done.

The haunted-house quality of Castle’s film came down to the fact that he always had some kind of silly gimmick to sell the movie to kids, who were the key audience for double-feature matinee showings. Castle also pulled tricks like planting fake fainters in the audience, or telling audience members that they had to sign a release form if they died from fright!

In this set you’ll find the four films he made after Macabre and House on Haunted Hill: The Tingler, 13 Ghosts, Homicidal and Mr. Sardonicus. The Tingler was Castle’s last film with Vincent Price, who was snatched up by Roger Corman and AIP shortly thereafter. Price definitely elevates the film, which is why it stands out in this collection. Here the gimmick was Percepto!, which basically gave your rear end an electric shock through the cinema seat. Price plays a doctor who’s trying to stop a parasitic centipede-like creature, the “Tingler” of the title, that attacks the human spine. In the film, the Tingler escapes into a silent-movies-only cinema, setting up the real audience for an appropriately timed zap. 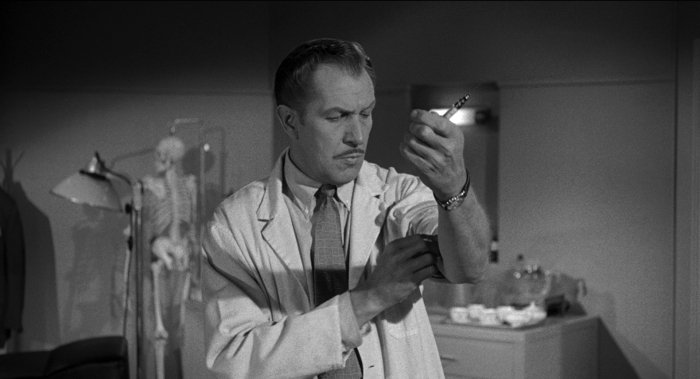 It’s also the first film to feature an on-screen LSD trip. The script was written by Robb White, a completely unmemorable writer but for some reason Castle’s go-to guy. White had heard about LSD from Aldous Huxley and started experimenting with it, then tossed it into the script. It was legal at the time, and the trip sequence is pretty laughable. Of course, the character sees a skeleton hanging on the wall that starts moving, the walls start closing in… Interestingly, the Roger Corman Poe films that Price later became closely associated with were also deeply hallucinatory.

The plot makes no sense, but Price chews the scenery to glorious effect. The Tingler was released by Columbia as a double bill with Jukebox Rhythm, a musical feature. Later, it toured for years with a variety of bill-mates.

13 Ghosts is a haunted-house film centred on a family that inherits a ramshackle mansion from their occultist uncle Plato Zorba. It’s the usual plot, with ghosts going bump in the night. The great gimmick for 13 Ghosts was Illusion-O, a viewer that made the ghosts appear if you looked through the red filter, or disappear when viewed through the blue filter. It’s a perfectly good haunted-house movie. Probably the most interesting aspect is that Margaret Hamilton (the Wicked Witch of the West) is in it, and is referred to constantly as a witch. The Wizard of Oz had actually faded into obscurity at this point—and was only then becoming a Christmas staple on TV. It’s one of those links that not everyone would have gotten at the time and probably works for a modern audience better. The Blu-Ray includes several versions of 13 Ghosts, including a black-and-white version and others where you can (or can’t) see the ghosts. 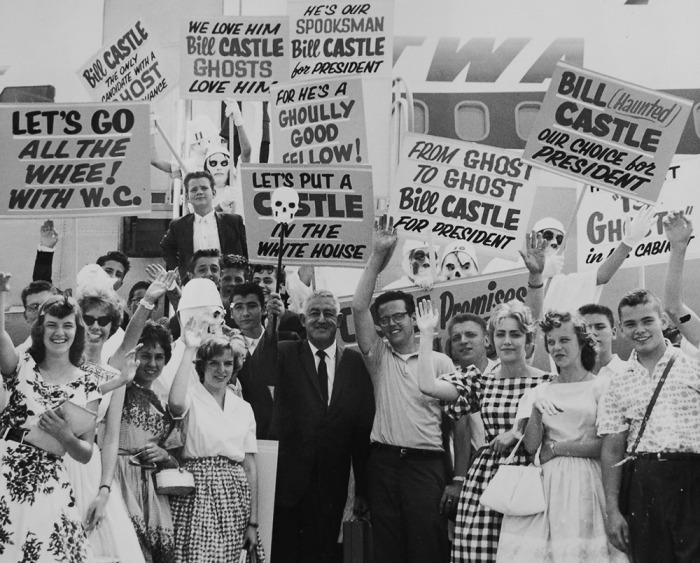 Next is Homicidal, which is probably the second-best film in the set. This was Castle’s response to Psycho—he had a bit of a rivalry with Alfred Hitchcock—so much so that there are shots he stole verbatim. In the late ‘50s, directors unless you were a film fanatic didn’t have the same celebrity they do now. Hitchcock’s trailers and his witty introductions to his TV series segments were part of creating the modern concept of the director. Castle started creating intros for his films that put out an Americanised version to get the same appeal.

Like Psycho, Homicidal is a California Gothic with a fairly obvious but radical twist. There’s a murder, an investigation, and it all goes in a weird direction. Joan Marshall plays a dual role as the protagonist—she later became well known as a TV actress, especially on Twilight Zone and Star Trek. For a knock-off, it’s fairly derivative but still fun. The Castle gimmick was a “fright break” five minutes before the end, where if you were too scared to see the end, you could get your money back. Of course, everyone stayed. It also has some interesting stuff about gender which for it’s time is very daring.

The final inclusion is Mr. Sardonicus, which finds Castle running out of ideas to some extent. It feels like a not-very-good Corman Poe movie, but he was trying for a Universal horror film feel. It’s set in the 1800s, but let’s say that set and costume design was not the strong point of these films. A villainous doctor with a grotesque face with a creepy smile hires Dr Robert Cargrave to fix his face… or does he have a sinister alternative plan? The prosthetics were so demanding that actor Guy Rolfe could only wear them for an hour at a time. This one had a clever, choose-your-own-fate ending by a (fake) audience poll, hosted by Castle. Of course he knew his audience, and he knew they would want the bad guy to be punished, so there wasn’t really an alternative ending (Castle maintained that there was, but a print has never been found.) It’s an early example of audience involvement—and just last week, Black Mirror announced a choose-your-own-adventure ploy for an episode, so the old conceits still work.

It’s great to revisit these movies, most of which haven’t been available in the UK since the days of VHS. If you’ve seen Joe Dante’s Matinee, which is very much a tribute to Castle, you’ve seen something of how these gimmicks worked. In Matinee, Dante’s fictional director Lawrence Woolsey makes atomic mad-scientist movies, though, which was not really Castle’s genre. John Waters is also a huge Castle fan, and was instrumental in starting the Castle revival. Waters wrote an essay in Crackpot about the director, and played William Castle in Feud (despite looking nothing like him.)

The box set is also full of extras, including the long out-of-print feature-length documentary by Jeffery Schwartz, Spine Tingler!: The William Castle Story, which is excellent and features interviews with Dante, Waters, Roger Corman, John Landis and more. There are several special features, new appreciations, archival featurettes that were released on the various Region 1 DVDs (mostly shot by Schwartz), outtakes from the documentary, new features by Kim Newman and Stephen Laws, some Trailers From Hell clips, original trailers, and a huge booklet with new essays, archival interviews and contemporary reviews.