Phase IV is the one and only feature film directed by Saul Bass, the man who basically invented the opening credits. It came out in 1974, and was not a successful movie because it’s a strange film that the studio struggled to market. It’s basically an art movie, but was sold as a ‘giant ant’ movie—and on top of that, they removed the final five minutes of the film in the theatrical version. The original ending is on the disc but, perhaps due to some rights agreement issues, it couldn’t be reinserted into the theatrical version of the film to create a ‘director’s cut.’

The movie is actually structured fairly similarly to 2001: A Space Odyssey, which had been released six years earlier. 2001, of course, was the key science-fiction film up to that point and arguably still is. It opens with a ‘dawn of man’ type sequence with these ants, the humans are deliberately bland like in 2001. Then there is stuff on technology and about the communication of ants, who in some ways are main characters of the movie. The original ending is a transcendent, psychedelic ‘Stargate’ kind of sequence that depicts of the future of the human race. The plot of the film is fairly simple: it’s all set in the desert, where these strange cosmic events are occurring. The ants have evolved, and are building strange structures in the desert whereas the human population has left the desert except for a remote lab. There, they have to fight off the ants, which are growing more intelligent by the day. They manage to start communicating with the ants.

It’s a very smart, strange, arty science-fiction movie, with a trippy side, also not unlike 2001. It as a message about the environment and mankind’s role in it, how it’s going to end up beating us in the end. 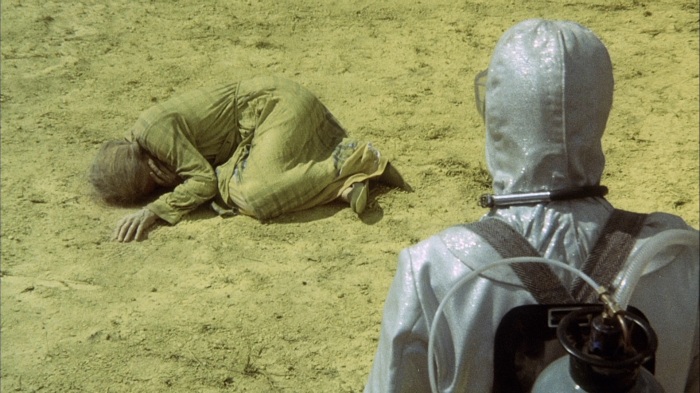 The cats in interesting. The two main actors are Michael Davenport and Michael Murphy. Davenport was a British actor who was in Chariots of Fire and A Man for All Seasons, and a good character actor. Murphy was an interesting choice because he rarely had lead roles in anything at all, but was well-known as one of Robert Altman’s go-to support actors. He also played the lead role in Tanner ’88. Both leads are good, but it’s not a film where the acting is what you go see it for. It’s more about the very visual storytelling.

As you can imagine, there are some extraordinary scenes with insects. A few years before there had been a film called The Hellstrom Chronicle, a quasi-documentary about the struggle between humanity and insects, and who will survive on Planet Earth in the end. Bass saw it, was very impressed, and hired one of the cinematographers, Ken Middleham, to shoot all the fantastic shots of the ants used here. Incidentally, The Hellstrom Chronicle actually won the Oscar and Bafta for best documentary feature, even though it wasn’t technically a documentary.

Phase IV proves that had he been given the chance, Saul Bass would have been a really interesting feature film director. It sounds like Bass stopped doing the credit sequences he was known for in order to try to get films made, he started make credit sequences again the ’80s for Scorsese. On the disc there are several other Bass shorts, including a documentary on solar power from 1980 and another on his titles, most of which are more experimental. The best of these is a film called Quest, an adaptation of a short story by Ray Bradbury. Quest is a simple short with extraordinary visuals, involving survivors of a crashed spaceship on a distant planet who are now subject to mysterious forces that are speeding their lifespan up to just eight days. The newborn tries to find his way back to the ship in those eight days, on a perilous journey that includes a Bigfoot-like creature, with geometric composition shots that link back to Phase IV. Panos Cosmatos, director of Beyond the Black Rainbow and Mandy, has noted that Phase IV was a significant influence on his work, especially on the first film. 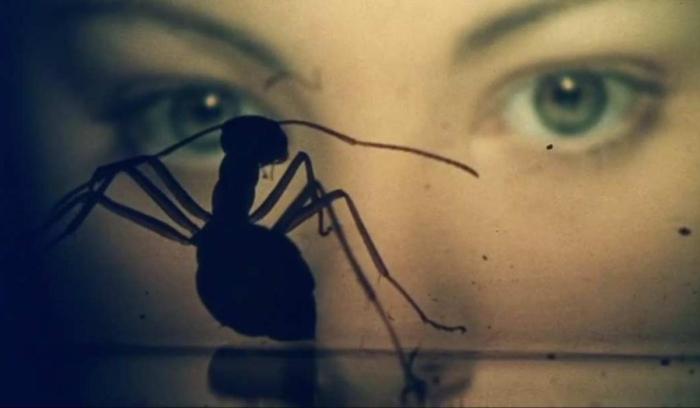 The disc includes the HD restoration of the theatrical version plus the original Saul Bass ending, as noted, with optional commentary track; the trailer which includes some shots from the ending that was removed; a commentary track with film historians Allan Bryce and Richard Holliss, and a booklet with essays on the film, including “Phase IV” by Deborah Allison, and “Adapt or Die: Killer Bug Cinema” and “Phase IV” by Liam Hathaway. If you are a fan of the movie, and of vintage science-fiction literature, Barry N. Malzberg wrote a novelisation of Phase IV. Malzberg is an interesting writer (he’s kind of the missing link between Philip K. Dick and Thomas Pynchon) so it’s probably worth hunting it down if you’re a fan of the film.

So far, I would say 101 Films’ Phase IV is the most impressive Blu-Ray package I’ve seen this year.